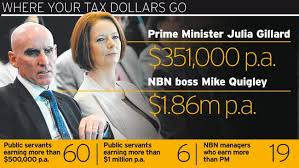 If you are doing it financially tough or you are unable to get decent medical treatment in Australia, you will most likely be sickened by the following.

Extract: Federal politicians, judges and top bureaucrats will receive a 2 per cent pay rise next month when an Abbott government-era wage freeze ends.

Extract: This is totally outrageous and if Treasurer Scott Morrison and Finance Minister Mathias Cormann are really serious about tax reform then they cannot allow the public servants to be excluded from the pain. No one is suggesting public servants should be picked out for persecution, merely that they be treated the same as all other citizens of Australia. Remember that so called ‘tax reform’ is merely a euphemism for tax increases and/or retirement benefit reductions.

Extract: Dear Department of the Treasury, Dear Sir I wish know the gross amount & entire cost of cost's to the Australian tax payer of all retired politicians pensions and benefits costs per Per/Annam. Yours faithfully, John Guppy.

It's worth reading the replies to this blog.

Extract: Thousands of territory bureaucrats had their annual pay packets boosted on Thursday by at least $2000, taking the wage increases for the most junior public servants to 13.6 per cent in the current four-year enterprise agreement.

Meantime, a group of federal public servants have been told there are no guarantees they will be offered a 2 per cent pay rise, despite the government lifting the cap on wage increases this week.

Posted by Mathew Naismith at 14:27 No comments: